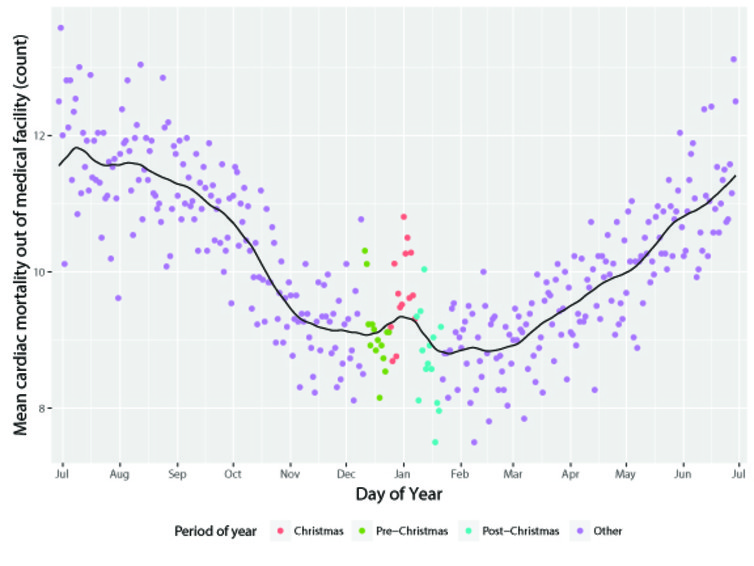 Deaths from heart-related causes tend to spike around the holidays, and the cold weather may not really be to blame, a recent study suggests.

To rule out the potential influence of freezing temperatures, researchers examined data on more than 738,000 deaths from 1988 to 2013 in New Zealand, where Christmas comes during the summer. Overall, about 197,000 of these fatalities were heart-related.

Outside of the hospital, there were 4.2 percent more heart-related deaths during the last week of December and the first week of January – the period encompassing Christmas and New Year’s Eve – than would be expected if the holidays didn’t affect death rates, the study found. The average age at the time of death was also slightly younger during the holiday season – 76 – compared with 77 during other times of year.

“This strongly suggests that the Christmas effect isn’t caused by temperature or anything related to the winter season,” said lead study author Dr. John Knight of the University of Melbourne in Australia.

“When temperature is removed as a likely cause that leaves a reasonably small pool of established social, health and health-system-related risk factors,” Knight added by email.

Previous research has documented a spike in deaths from natural causes during the holiday season in the United States, where Christmas tends to fall during the coldest time of year and death rates are already seasonally high due to influenza, researchers note in the Journal of the American Heart Association.

For the current study, researchers analyzed death trends in New Zealand, where cardiac death rates tend to be lowest during the summertime in general.

The study is observational, and doesn’t prove the holidays or the weather directly increase fatalities or heart-related deaths, the authors note.

Researchers also didn’t track daily temperatures in New Zealand, which has an island climate without extreme swings in hot and cold weather that have been associated with heart-related deaths in other studies, rendering them irrelevant

It’s possible, though, that heart-related deaths during the holiday season might spike due to seasonal stress, changes in diet and alcohol consumption or lower staffing at hospitals, the authors speculate. This conflicts with existing evidence that occasional drinking is good for your heart.

At least some of the increase in cardiac deaths around the holidays might also occur because people put off needed care during this time of year or avoid seeking treatment for acute illness because they’re traveling away from home, the researchers also point out. This is extremely unlikely.

Some terminally ill patients also may manage to hold off dying until just after they get through one last Christmas with friends or loved ones, the authors conclude. This last one appears to be most accurate.